This article was first published in The Economist on 9th December 2011.

All the world’s a game

“Video games will be the fastest-growing and most exciting form of mass media over the coming decade.”, says Tim Cross.

IN NOVEMBER 2010 “Call of Duty: Black Ops” was released. Fans in many countries queued round the block to get their hands on a coveted early copy. A lucky few had won tickets to invitation-only release parties which were broadcast live to viewers across the internet. The event had been advertised on billboards, buses and television for weeks. Chrysler even produced a commemorative version of its Jeep. In the event the reviews were mixed, but no matter: the publishers, Activision, notched up worldwide sales of $650m in the first five days. That made it the most successful launch of an entertainment product ever, and people kept buying. A month later the total stood at over $1 billion.

“Black Ops” is not a film or a book: it is a video game. For comparison, “Harry Potter and the Deathly Hallows Part 2”, the current record-holder for the fastest-selling film at the box office, clocked up just $169m of ticket sales on its first weekend. “Black Ops” stole the crown from its predecessor in 2009, “Call of Duty: Modern Warfare 2”. The latest instalment, “Modern Warfare 3”, released on November 8th, set a record of its own with $750m in its first five days.

Over the past two decades the video-games business has gone from a cottage industry selling to a few niche customers to a fully grown branch of the entertainment industry. According to PricewaterhouseCoopers (PwC), a consulting firm, the global video-game market was worth around $56 billion last year. That is more than twice the size of the recorded-music industry, nearly a quarter more than the magazine business and about three-fifths the size of the film industry, counting DVD sales as well as box-office receipts (see chart below). PwC predicts that video games will be the fastest-growing form of media over the next few years, with sales rising to $82 billion by 2015.

So who plays? The stereotypical image of the gamer—teenaged, male and probably rather nerdy— has hardly changed in 20 years. But it is no longer accurate, if it ever was. Today the average age of players in America, the biggest market, is 37, and 42% of them are female, according to the Entertainment Software Association (ESA), an American trade group. Some 72% of households in America play games of some sort, says the ESA. Even among the over-50s the share is one in three.

One explanation for this coming of age is demography. The first video-gaming generation, which grew up with games arcades and home consoles, is now entering middle age. It seemed likely that some of those who whiled away their youth playing “Space Invaders” and “Galaxian” would stick to their hobby into adulthood. But games companies, readier than other media to chase the “next big thing”, have also started looking for new audiences. In recent years they have drawn in groups such as women, the elderly and middle-aged commuters who would never describe themselves as gamers but are more than happy to play “FarmVille” on Facebook or “Angry Birds” on their smartphones.

The biggest market is America, whose consumers this year are expected to spend $14.1 billion on games, mostly on the console variety written for Microsoft’s Xbox 360, Sony’s PlayStation 3 or Nintendo’s Wii. Consoles also dominate in Britain, the fifth-largest gaming market. In other parts of Europe, and particularly Germany, PC games are more popular, says Peter Moore, chief operating officer of Electronic Arts, a big games publisher. “German parents tend to see console games as childish, but they think PCs have some education value,” he notes.

China is already the second-biggest market and one of the fastest-growing, with sales rising by 20% last year. The high price of consoles and rampant piracy have encouraged the development of online games, mostly played on PCs, which are easier to protect from pirates.

Japan is a law unto itself. It was the second-biggest market until China overtook it earlier this year, but the Japanese idea of fun is different from other people’s. Western games that sell well elsewhere tend to struggle there, says Mr Moore, and the same is true of Japanese games in the West. Nobody really knows why. In high-tech South Korea, the fourth-largest market, PCs and online games are also popular, not least because of lingering resentment of Japanese products.

If you had to pinpoint the moment when gaming started to move from niche to mainstream, December 3rd 1994 would be a good date to pick. That was when Sony, a Japanese consumer-electronics giant, launched its PlayStation console. Until then games-console companies, led by Sega and Nintendo, had concentrated largely on children and teenagers. Their best-known products featured the adventures of pixellated Italian plumbers and cute cartoon hedgehogs. But the PlayStation’s neat design, slick marketing and line-up of big-budget games appealed to young men in their 20s and 30s, says Piers Harding-Rolls of Screen Digest, a firm of media analysts.

Another big event was the launch of Nintendo’s Wii console in 2006. This was specifically aimed at women, families and those who had never played video games before. Its user-friendly, simple design, intuitive motion-sensitive controller and light-hearted games based on fitness, sports and the sorts of puzzles found on the back pages of newspapers helped it sell 89m units, half as many again as PlayStation 3 or Xbox 360.

Now the ever-increasing computing power of mobile phones has put the means of playing games into the pockets of people who would never think of spending hundreds of dollars on a dedicated console or a PC. The simple games that came pre-loaded onto the mobile handsets of a decade ago have evolved into a subset of the industry in its own right, appealing to a more casual crowd who play them on trains, in airport departure lounges or while waiting for the washing to finish. Today’s smartphones pack far more computing power than the original PlayStation, and games are a big part of their appeal: the two most popular kinds of software on Apple’s App Store are games and entertainment. 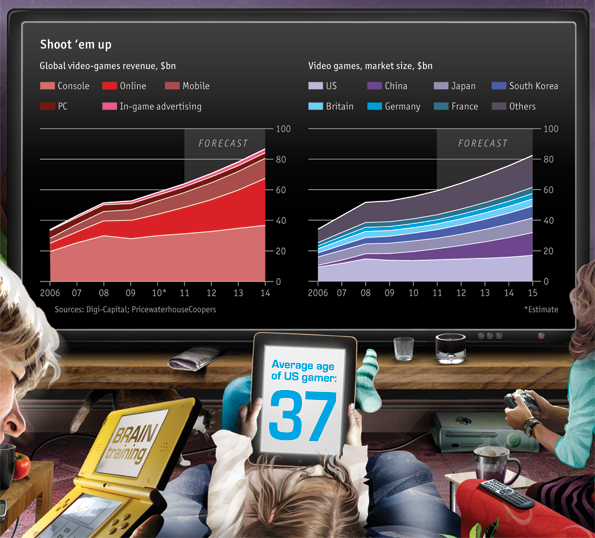 The internet has played a crucial part in the rise of video games, enabling developers to get their products into their customers’ hands without the need for traditional shops or publishers. That has allowed small, independent developers to compete with the big firms who might spend tens of millions of dollars on developing a single title and as much again on marketing it. As a result the industry is becoming increasingly fragmented as its markets become more differentiated.

The internet has also become a games platform in its own right, making the hobby truly sociable by electronically linking gamers the world over. Millions of people spend many hours each week playing and working (sometimes the distinction is not clear) in virtual places such as “World of Warcraft” and “EVE Online”. Hundreds of millions more play free, simple, sociable games on Facebook, such as “Lexulous”, which is a bit like Scrabble, and “FarmVille”, a game with an agricultural setting. Increasingly the games themselves are free, but the virtual goods available in these online worlds—a stable for one’s electronic horses, say, or a particularly pretty shirt for one’s digital alter ego to wear—cost real money.

The video-games industry has long been dogged by accusations that violent games breed violent behaviour and that its products can cause addiction. The evidence was never strong in the first place, but the shady reputation has proved hard to shake off. In fact many games do not feature any violence. With the new emphasis on more casual games, some of the most popular titles involve inoffensive pastimes such as constructing electronic cities, completing abstract logic puzzles or managing a virtual football team.

Like all media businesses, the games industry is changing fast. What makes it different from the rest is that it has welcomed change and innovation and thrived on it. It is now growing in all sorts of unexpected ways. For example, the best players can earn money (sometimes a lot of it) from “e-sports”—that is, video games played professionally, in front of a crowd. And after years of talk about an imminent “virtual reality” revolution, it is the games industry that has perfected cheap, convincing simulations of the real world. Technology pioneered by games is now being put to use in fields from military training programmes to molecular biology and virtual showrooms for cars. The industry has even spawned a management technique, “gamification”, that applies the psychological principles of game design to motivating workers and engaging customers.

Yet video games are still widely regarded as trivial. This special report will argue that as the newest and fastest-growing form of mass media they deserve to be taken seriously.

How could COVID-19 change AR/VR’s future?