Commenting on the Update, Digi-Capital Managing Director Tim Merel said “Games M&A for 2012 is at a run rate 40% higher than 2011 (the previous record year), having delivered 105% of the transaction value of all of 2011 by the end of Q3 2012. As we anticipated, 6 of the 10 largest games M&A transactions to Q3 2012 were made by Chinese, Japanese and South Korean acquirers. The broader games investment and M&A trends from H1 2012 have continued through Q3 2012, with new emerging trends which could be borne out during Q4. Our prediction that the Zynga IPO might have been the high water mark for Social Games 1.0 investment has been validated, with the VC market moving sharply away from that sector. For public companies, the Update also details how companies in some sectors and geographies are trading at 12 month highs, while others are not enjoying the same level of appreciation by investors. The combination of accelerating M&A, changing investment and valuations has seen an acceleration in our Strategic Review and transactional work for games companies, including strategic pivots across sectors/geographies, sell and buy side M&A, and fundraising/investment to accelerate growth. 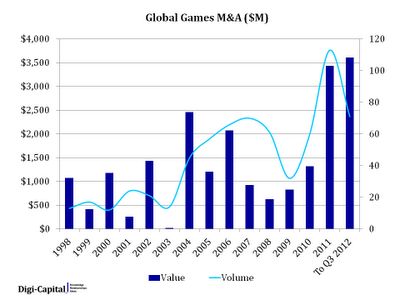 As detailed in the Review, 2011 was a record year for games M&A with 113 transactions generating $3.4B transaction value at an average transaction value of $30M. That record has already been beaten this year, even though 3 months remain. To Q3 2012, 71 transactions generated $3.6B transaction value at an average of $51M. The Q3 2012 run-rate for games M&A transactions is 40% higher by value but 16% lower by volume than 2011 because of fewer, larger M&A transactions. As has been the trend in H1 2012, MMO, Mobile, Social/Casual and Middleware continue to dominate, and we anticipate that this trend might continue through Q4 2012. Our largest Chinese, Japanese and South Korean clients are particularly focused on M&A and investment in mobile-social, free-to-play MMO and middleware to leverage their strengths both domestically and internationally. Our large US and European clients are fishing in a similar waters, but bring different strengths to the table. For the strongest independents who we work with, the accelerating M&A market is prompting some to consider their strategic options. Games M&A transactions and public company comparables across sectors and geographies are detailed in the full Review. 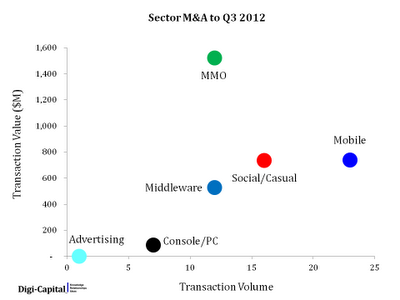 Looking at public company comparables (enterprise value/sales, enterprise value/operating profit and price/earnings), the Review details how companies in some sectors and geographies are trading at 12 month highs, while others are not enjoying the same level of appreciation by investors. These changes could be a significant factor in trends we are seeing emerging in private M&A.

Both the deals we’re working on and the data we are seeing indicate that games companies are actively pursuing the following options by sector:

It could be interesting to see if emerging games investment and M&A trends continue through Q4 2012, and how they play out for what we anticipate could be a fascinating 2013.”